The museum features a photo essay of helicopter development from nature’s own dragonfly and hummingbird, man-made boomerangs and ancient Chinese tops, to international developments in the twenty-first century.

Igor Sikorsky’s career is evoked and his first craft is meticulously modeled. All helicopter pioneers are displayed.

Dr. Anselm Franz, inventor of the Jumo 004, developed the gas turbine engine in Stratford in the 1950s and his T55 cutaway can be seen and an actual T53 is on display.

Multiple models and photos of all current rotary craft can be found. 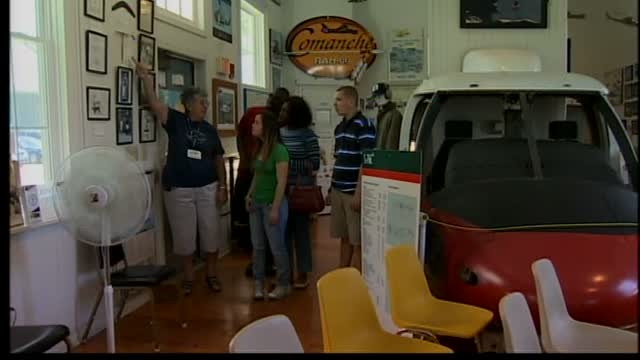 A full size cockpit is center stage in the museum. Guide Gale Whittemore provides a tour for visitors.

New to the museum is a computer Flight Simulator due in part from a generous grant from the Stratford Historical Society in addition to contributions of matched giving from the Honeywell Corporation and efforts from the Museum’s Board of Directors.

A current exhibit features John Olsen of the Coast Guard who flew an R4, Sikorsky’s first production helicopter, above the Arctic Circle and was the first to land in Thule, Greenland in the summer of 1946. Within 5 months in January 1947 he flew to Antarctica’s icy reaches from the icebreaker North Wind during Admiral Byrd’s Operation High Jump. Exclusive photos detail these accomplishments.

Another current exhibit features Stratford’s other helicopter: the Bendix helicopter. It was the creation of Vincent Bendix, the inventor of the auto self-starter, four-wheel brakes, and carburetors. He was the developer of the Bendix air races and trophy. His helicopter models were based on the coaxial design as demonstrated in films of the 1940s. Bendix’s sudden death stymied further development. The firm was purchased by Gyrodyne of Long Island who continued development and created Navy helicopter drones and mini rotor craft for individuals.

This seasonal Museum is open beginning Memorial Day weekend and ending mid October, Friday through Sunday, 1:00 pm to 4:00 pm and is air conditioned for your comfort. Come and enjoy this FREE opportunity to discover the joys of vertical flight, try your hand at the Flight Simulator, and speak with the experienced volunteer docents who are at your service to make your visit memorable.

There is free parking and no admission fee. Donations are very much appreciated.