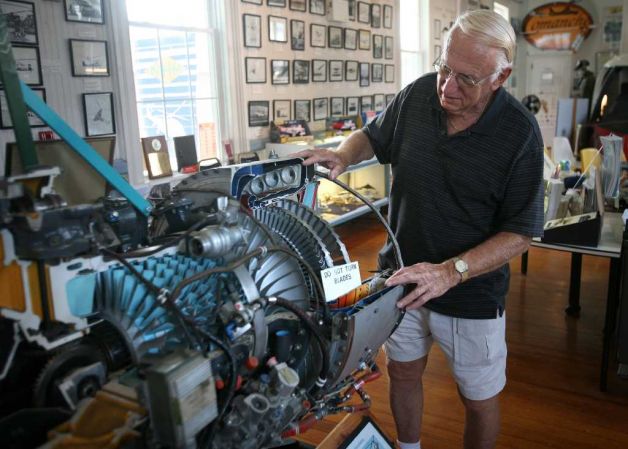 Stanley Gorlo of Stratford looks at a Lycoming T55-L-5 gas turbine Chinook helicopter engine at an exhibit the National Helicopter Museum in Stratford on Thursday, August 18, 2011. Gorlo is a docent at the museum. The exhibit honors turbojet engine designer Dr. Anselm Franz, who designed engines for the the Huey and Chinook helicopters, after designing the first jet engines for the Germans
during World War II. Photo: Brian A. Pounds / Connecticut Post 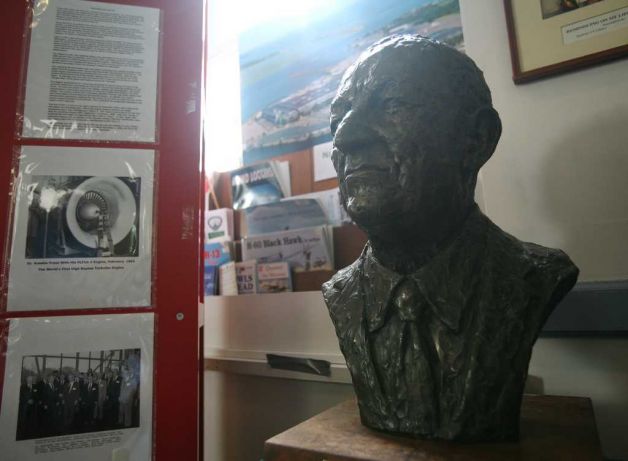 A bust of Dr. Anselm Franz, designer of the engines for the Huey and Chinook helicopters, at the new exhibit in his honor at the National Helicopter Museum in Stratford on Thursday, August 18, 2011. Photo: Brian A. Pounds / Connecticut Post

STRATFORD — Just about everyone has heard about Wilbur Wright, Igor Sikorsky, John Glenn and even Louis Bleriot.

But missing from just about every list of “aviation pioneers” is Anselm Franz, the turbine engine genius who was responsible for the first jet engine, the first helicopter turbine engine and the first “high bypass” turbofan engine.

It also can be said that it’s because of his work that more than 30,000 people over a half-century found employment at Stratford’s Avco Lycoming Army Engine Plant.

Franz’s accomplishments are being celebrated through Oct. 15 at a special exhibit at the National Helicopter Museum on Main Street, where there are cutaway displays of two of his crowning achievements — the T53 engine that powers the Bell UH-1 “Huey” and the T55, the power plant of the Boeing CH-47 “Chinook,” two helicopters that came to symbolize American military might from the 1950s through the 1980s.

Franz’s son, Peter, who lives in Stratford’s Lordship section, says his father never got the recognition that he deserved.

“They have a show that they run on the History Channel every year or so about the ME 262, and not once do they mention that my father developed the Jumo 004 engine, which powered that aircraft,” he said in a telephone interview. The ME 262 was the first practical jet fighter.

He also says that the U.S. Army has also failed to honor Franz. “I was told that it probably has to do with the fact that ME 262s were shooting down B-17s during the war,” he said. “But you have to remember, too, that every Chinook and every Huey gets airborne because of my dad,” he said.

“He was always a gentleman,” said Ken Collinge, an engineer at the Avco Lycoming plant between 1957 until the plant was shuttered in 1996.

Franz had to walk and bicycle for hundreds of miles across Germany after the surrender to avoid getting picked up by the Soviets, who were also eager to sweep up German engineers. His family arrived
in the U.S. months later.

After working for a time at Wright-Patterson Air Force Base in Ohio, he moved to Stratford in 1951 to head Avco-Lycoming’s turbine division. Work on the T53 began immediately. Earliest variants had 860
shaft horsepower, but improvements came quickly. The T53, still in production by Honeywell Aerospace, now has an output of 1,800 hp.

“It’s really quite amazing that my father’s creation is still in production after 60 years,” Peter Franz said. “Unheard of, actually, in the aviation industry.”

Both the T53 and the T55 employ an ingenious “folded” design in which the compressed air takes an S-shaped path to the combustion chamber to save space.

Franz also built the T53 and the T55 in three assemblies, making repairs and overhauls much easier.

“Typically, the hot end —- the combustion end —- needs more frequent replacement,” Collinge said. “So, you unbolt the hot end, bolt on a new one, and you’re on your way. Before Franz, that was unheard of in a turbine.”

You can reach John Burgeson at 203-330-6403 or by e-mail at jburgeson@ctpost.com. Follow twitter.com/johnburgeson.